It only took two years of research, lacking any dedicated references on the non-functional pottery of Lane, to piece together the identities of the mystery horses of Maureen Love. By research, I mean, specifically, going out and physically walking the miles of antique malls and flea markets, photographing them in the wild, communicating with other collectors, sending friends and family out on the hunt, and scouring the web for images. It was not a matter of simply cracking open a book and copying someone else's words. It's been both a literal and figurative journey, and original material can't be 100% correct all of the time. As often as I embraced/pointed out my own errors, and replaced them with better data, it does feel good to share the occasional,

"How about that? I was right." [insert pat on back] 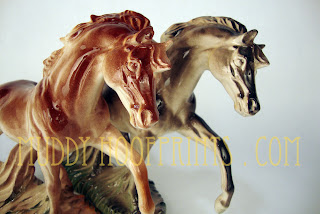 This is how I felt when I found this link, today, to an eBay auction dated March 23, 2007 (three years before my first step into blogging), selling an H-114 v.2 Bent Leg positively identified as Lane Ceramics. Why so long for this to turn up on a search? I do not profess to know the workings of Worthpoint. The horse appears to be identified by the seller via an outside, non-molded indication such as a sticker, which is absent on all of the known Lanes in collector hands. Surviving Lane stickers on any of their products aren't exactly abundant, so this isn't all that odd.

I will conservatively remark that, as far as this new evidence indicates, at least the later derived molds were produced under the name, "Lane Ceramics". As Lane was known to have changed names a few times, and was both producer and distributor for other factories, we can't rule out the earlier version horses having a different factory identity. For now, though, it feels pretty safe to continue calling them all Lanes.

This is a big deal to me because I recently found another original price tag, and the markings on it identified the exact mold. Opposite the mold number, "A-9", is a mysterious "MC". This had me researching both "Marcia Ceramics" and "Maurice of California". Frustratingly, Marcia did animal figures in black pearl, and Maurice used art glazes with airbrushed gold accents swipes and eyes on their very few animal figures. Red herrings, or perhaps they were factories distributed by Lane? The 6-71 may very well be the inventory date (June 1971), as mentioned in an earlier original price tag discovery. 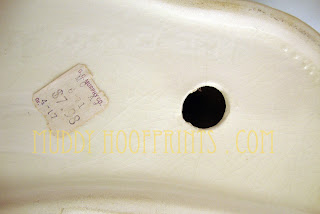 Original price tag on an A-9.
G.C. Murphy was a chain of five-and-dime or "variety" stores.
If you don't remember dimestores, it was like a small Wal-Mart crossed with a Dollar Store.
Bags of plastic dinosaurs, for everyone!

In the first post on this subject, I wrote:

"It is not beyond reason that all of the Lane molds could be ordered in any of those colourways. Let's keep an eye out for the unexpected!"

That was a good call. [pat, pat] I have now updated the molds' color catalog:

17" 239 v.2 : Woodgrain, Black with gold, White Pearl (may have been hobbyist-glazed), Neon Orange with gold

If you'd like to see photos of the above known examples that haven't been shown on this blog before, drop me a email. I don't like posting copyrighted images to my blog without express permission. Now that I have recorded so many mold versions, it sure looks like these horses were extremely good sellers. A pottery doesn't bother to make multiple sizes if the molds aren't lucrative. Maybe some mold versions were created just to make father-son sets possible? Some of the mold changes are clearly meant to cut costs. In the cases of the H-1 v.2 and both of the Bent Leg horses, they were probably changed to save on product breakage. The reiteration and longevity of these horses point to Maureen's appeal and talent, in the first place.

Collector Diana Dubbeld sent me these tantalizing images of her eBay win of a previously unrecorded version of 239... with a very Maureen-era appropriate date of '62, carved into the base. What makes him special as a mold is the fact that he has no added height to his base or neck, yet stands 18" tall. He has the correct original ears. We might need to call this the real 239 version 1, since it seems the most true to Maureen's hand, and is bigger than the other trad-scale 239 molds. Note, it lacks the 239 engraving in bottom. 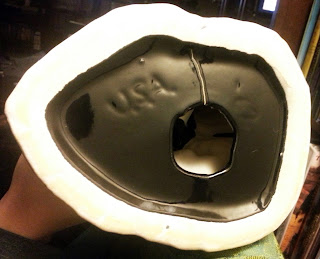 A firing crack separates the U.S.A. and the '62
1960-2 were the years Hagen-Renaker laid off their staff, including designer Maureen Love.
Photo courtesy D. Dubbeld 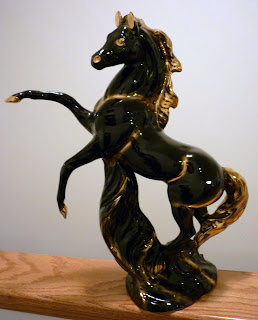 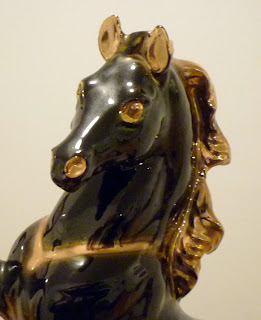 Diana also recently scored this pair of H-1 v.2 in Natural Lilac... or, unfinished White with purple and gold, depending on your opinion. 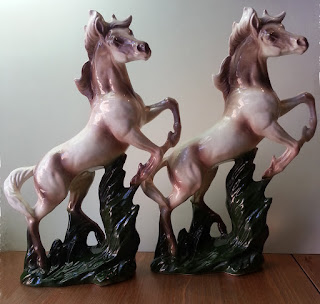 I suspect these are the horses below, oddly missing the last step of decoration: overglaze gold.
Possibly less common, or a one-kiln-load factory error.
Photo courtesy D. Dubbeld. 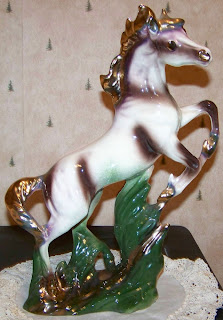 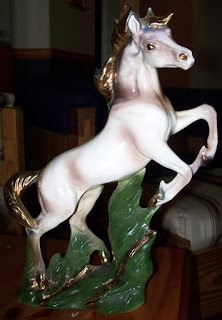 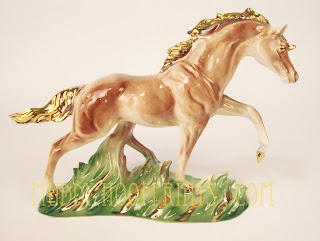 Natural Salmon with gold on A-9 v.1
A far more peach-orange color than the horses above. No hint of purple. 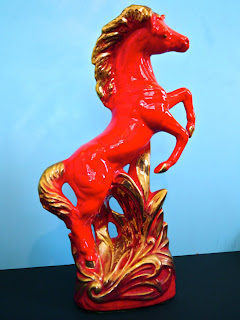 This derived giant H-11 is so far removed from Maureen's hand, I don't really mind the glaze. Much.

I had a chance to better examine what makes the A-9 version 1 different from the version 2. Now that I have seen a crisply detailed v.2, I have noticed even more disparities. The base is not just chopped shorter, it is also chopped narrow, right up to the side of the hooves. The languid curves along the base sides are gone. The base texture has suffered a graphic gouging by ham-hands, such that parallel and vertical "grass" lines decorate the now squared-off margins. The original base's diagonal dips and waves of texture are gone or now minimized, and only where they are close to the horse. 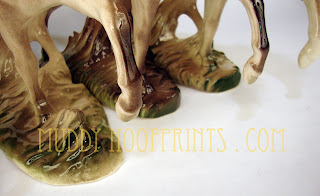 The bottom sweep of the tail is missing, where it comes close to the horse. It even seems to disappear further with mold wear and seam spongeing. 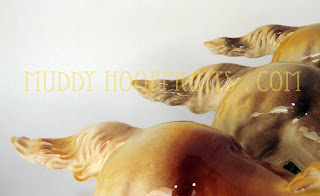 The topmost "shwee" of the mane, as well as the "serif" of the forelock sculpt are not present on v.2 models.

However, the anatomy of the horse, as presented on a crisp example, looks just as it did from Maureen's hand. Every neck wrinkle is there. 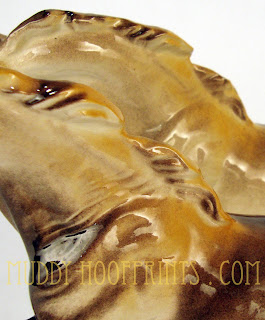 Dark horse in foreground is the version 2, showing it kept the anatomy detail.


This means that the A-9 v.2 and the H-1 v.2 are both derived molds that maintain their equine art fidelity, just not the original base. As long as you get a crisp example, these are the best of the derived molds, the closest to their original version 1.

The Natural A-9 Continuum


Noun. A continuous sequence in which adjacent elements


are not perceptibly different from each other,
although the extremes are quite distinct.


Big thanks are due to collector friends who have contributed photos and finds for this update: Diana Dubbeld, Shannon DeWaal Hayden, and Maggie Barkovitz. Much gratitude!

Kristina Lucas Francis
is a full-time ceramist and a commercial sculptor, specializing in animal art. She is continually inspired by the natural world and all animal artists, both the well-known and obscure.